I've been wanting to do this tag post for so long ...............! Thanks to Georgina from Makeup Pixi3 who created the tag way back when! Also to Sasha from Ramblings of a Beauty Bird who made me laugh when she wrote that the first ever piece of music she purchased was on a tape and I quote "I know - TAPE - how old!" - cheers Sasha - that makes me feel positively ancient! ;)  The first music I purchased were the old 45" singles, albums and 12" singles which you played on a 'real' record player - remember having to 'put the needle on the record' - those were the days! I remember being locked in my bedroom for hours on end when I was young playing my vinyl - still got most of them but no record player! 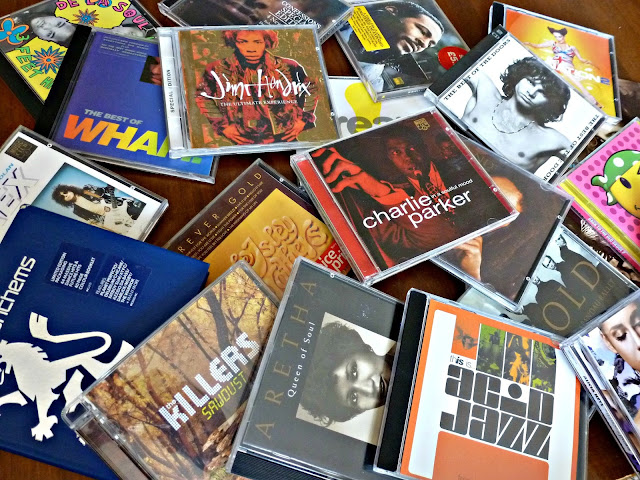 What's your favourite type of music?
All sorts - depends on my mood and what I'm doing! Could be anything from house music to jazz, new romantic to motown, soul to hip-hop, blues to funk - like I said all sorts!

What's your least favourite type of music?
I can't do brass band (sorry!) - all that 'oomp-pah' just doesn't hit the spot! Don't really get on with  excessive metal (is it 'death metal'?), punk or trance either - scrambles my brain up a bit too much!

What's the best gig you've been to?
I haven't been to see a 'current' band for years - gigs are so expensive these days - but I did see a lot of New Romantic bands back in the day. Depeche Mode (3 years running), Spandau Ballet, Ultravox and OMD. I would love to see Usher in concert - one day though!   I've been to watch my brother Mike playing at Boy George's gig fairly recently, which was a good one and also various local jazz gigs he's played at - love a good jazz gig, especially when they really go for it with the be-bop, it just gets under your skin!

What albums are you listening to at the moment?
Recently I've had the Trevor Nelson R&B Collection and Alexander O'Neal  'Hearsay' on in the car - also groovy 80s classics are my perfect 'hot weather' music - the louder the better - think Shalamar, Rufus and Chaka Khan, Heatwave, Earth Wind and Fire - marvellous!

Just have a listen to this though while you read my rambling below - I have this vinyl EP! Just bear with me!


What you have to remember is that house music and the whole dance scene was just emerging and it was such an exciting time in the clubbing world - you had to be there!  Imagine being in a dark smoky nightclub (we smoked in nightclubs in those days!) and 'Move Your Body' starts up and then the beat kicks in with full on base while the track builds up - it's sending shivers down my spine remembering all that 'jacking' of bodies on the dance floor and getting completely lost in the music - I just link it with pure and utter exhilaration! Like old Marshall says, 'Move Your Body, Rock Your Body...Music's going to set you free...!' All that's in your head is the music and the beat and nothing else matters at that point...! Bit intense but that's how it was - anthem alright! Back down to earth now...!

If you could instantly know how to play any instrument, what would it be?
I can sing (but am sorely out of practise) - so for now I'll just say my (rusty old) voice would be my instrument!


Music is therapy - the stuff  moves me!  I've grown up with it (dad's jazz was always playing at home!). It's the real deal, it makes you laugh, makes you cry, makes you tap your foot, sing your little heart out and shake your booty and in my opinion there ain't nothing better!

If you've read this far down well done! Hope you've enjoyed my ramble (bit passionate about me ol' music I am!).  I'll try not to waffle on too much in my next tag post!